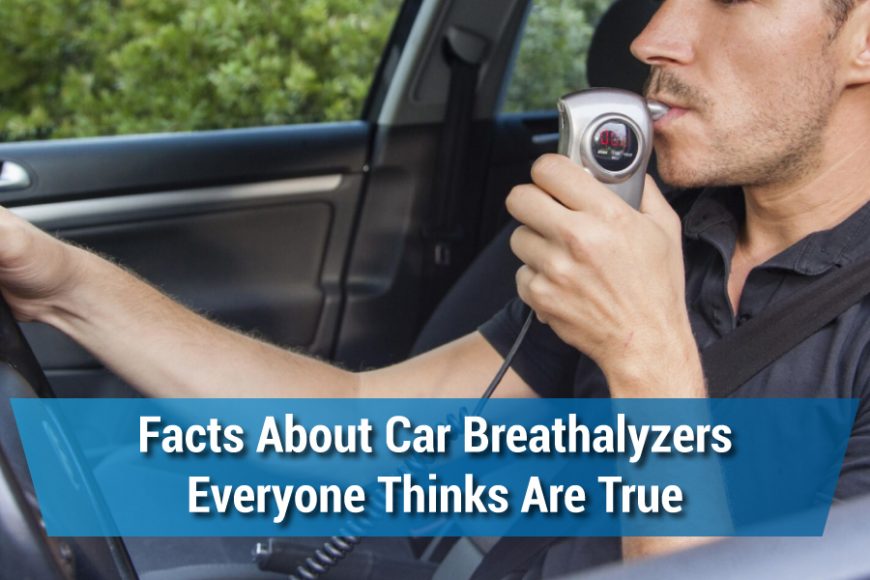 Facts about Car Breathalyzers Everyone Thinks Are True

You may be thinking, what is this all fuss about breathalyzers. Some people claim to beat them and even tell you “certain facts” to fool this little gadget. However, when it comes to technology, what you hear or see is not always the actual story.

So, If you came across this article while searching on how to beat breathalyzers, stop right there! Because once you get caught at a checkpoint, there will be nothing you can do to hide your alcohol consumption. This little detective will instantly notice the Blood Alcohol Concentration (BAC) in your body with just a blow.

Once you are convicted of DUI (Driving Under the Influence) charges, you’ll be ordered to install an IID (Interlock Ignition Device) in your car which won’t let you start your car next time unless you blow into it to verify your alcohol-free body. Not only that, but it will also require you to blow into it in-between driving for multiple times, otherwise loud alarms and flashing lights will leave you in no position to continue driving your car.

What’s surprising to note is that many “cheat” attempts at fooling breathalyzers can increase your chances of getting caught. Thus it is significant to know what you can’t and shouldn’t do when it comes to car breathalyzers.

Here you’ll learn about the top ten breathalyzers myths which people think are facts. You may even be surprised at how much precise these breathalyzers are in catching even the little alcohol presence in your breath!

Excessive Water Intake Will Reduce The Alcohol Level In The Body

Water is your best friend, but not when you are taking a DUI blood test. The only thing water can do for you when you are drunk are to hydrate your body which may make you feel better, but it doesn’t affect at all to the alcohol concentration in your system. Eventually, you’ll get caught by a breathalyzer.

Sucking A Penny Can Help To Fool A Breathalyzer

A large number of people believe in this but the truth is that it is nothing but another common myth! Pennies do nothing for you if you suck them. They cannot “mask” or put a shield on your breath to hide your alcohol intake.

Mouthwash Has The Power To Reduce BAC Reading

No, it doesn’t. Any mouthwash, mouth spray, and even cooling gums do not contain any chemical formula that can help you trick a breathalyzer. On the contrary, using mouthwash may put you in more trouble by raising the BAC reading as they contain some concentration of alcohol.

Sleeping After Drinking Will Lower The Alcohol Level

The average withdrawal time of alcohol from your body is 2 hours per glass, so sleeping will only help if you sleep for two hours after drinking one glass. If you have done excessive drinking, the last thing you should think about is driving a car, because inadequate sleep will neither freshen you not aid you to cheat IID test.

Consuming High Caffeine Will Replace Alcohol In The Body

Don’t even think about it. High levels of caffeine can result in severe after-effects, on the top of which are high blood pressure and rapid heart beating. And as far as any benefits are concerned, caffeine doesn’t replace alcohol in the body. Instead, its high concentration can combine with alcohol levels to make you more impaired, and restless. This, nevertheless, leaves you in any position to drive, nor deceive a breathalyzer!

One simple advice: don’t try to fool the technology. At most of the time, police officers keep a close eye on the suspect and even put their hand at the end of a breathalyzer to feel the breath. Any attempt to fake such test will eventually fail when they will ask you to repeat!

Cold Shower Will Cover Up The Presence Of Alcohol

As stated earlier, water inside the body does nothing in hiding alcohol consumption. The same rule applies to water outside the body as taking a shower may alert you, but won’t “mask” the alcohol in your body.

What you should keep in mind is that a breathalyzer is made “specifically” for detecting alcohol and whatever you eat or drink doesn’t affect its ability to spot alcohol. Thus eating any food will do nothing in this regard.

Holding Your Breath/Burping Before Blowing Makes A Difference

Both of these are wrong. The sole purpose of a breathalyzer is to detect the presence of alcohol even if you try to hyperventilate or hold your breath. Neither does burping before blowing into the gadget changes anything.

Another myth is that foods that have strong odor such as garlic do not minimize BAC reading. Similarly, starchy foods such as bread and pasta slow-down the absorption process of alcohol. This is not a benefit, but a loss in the long term as this will delay the removal of alcohol from your body evermore!

Hopefully, now you know all the myths about breathalyzers which people think are facts. The best way to remove alcohol from your body is to let is to withdraw naturally instead of looking for cheats. Always remember that these gadgets are manufactured specially to catch alcohol, thus using any trick won’t help!