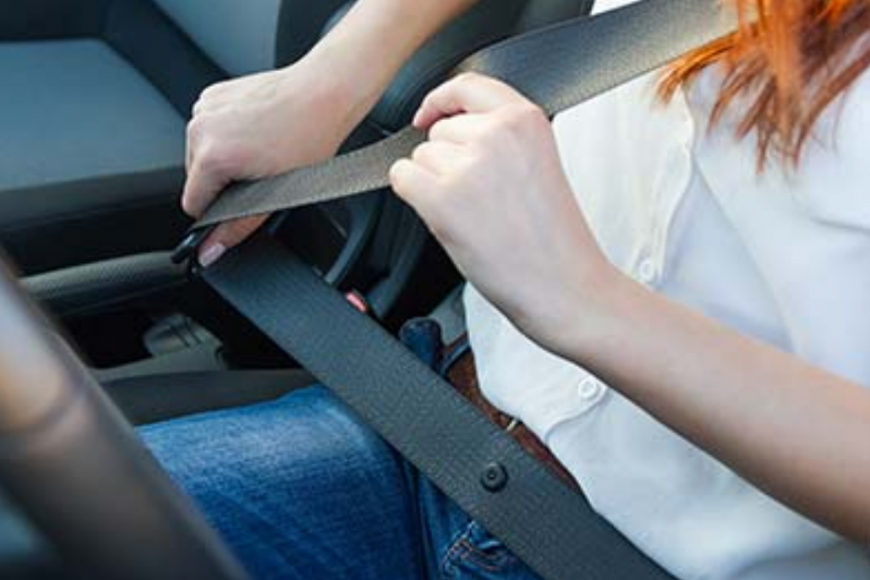 REASONS WHY WEARING A SEAT BELT DURING DRIVING IS IMPORTANT

Do you wish to reach your destination safely? Do you want to avoid visiting the hospital while driving to a party? Do you like driving over the speed limit or not? Today, all types of vehicles, whether a truck, car, van or even a tanker has a component installed in them, which is commonly known as a seatbelt.

It not only keeps you safe in case of any accidents, but it also keeps you breathing. It is essential to understand that accidents can happen anywhere at any time of the day, so it is better to be prepared. All you need to do is put on the seatbelt provided the manufacturer for the driver’s and passengers’ safety.

Your car could lose control and run into a tree or another car, but if you are not wearing the seatbelt, then the chances of being tossed out of the car are very high. Would that be a pleasant experience? Not wearing a belt is like knowingly putting yourself in harm’s way as the driver gets bumped into the windshield and the dashboard in case of an accident.

This does not only save your life but also protects your medical insurance for future emergencies. Moreover, there would be no need to pay for your car’s repairs or get charged by the traffic police for multiple offenses like not wearing the seatbelt and crashing your car.

Here are a few convincing reasons to motivate you to put on the seatbelt before even turning on your car;

It is a fact that wearing a seatbelt not only keeps helps you remain in your seat, but it also protects you from getting hurt. It is installed in the car for a reason, so you might as well use it and stay alive to achieve all your goals in life.

Driving a vehicle is not as easy as it sounds, especially if you have to drive for a long distance. Drivers can quickly get sleepy and dizzy while driving without knowing where they are going. Hence, there are more chances of accidents where drivers are unaware of the road, so wearing a seatbelt is the best defense technique they have against death.

Despite all the new inventions to keep the driver and the passengers safe, seatbelts remain the most essential tool in saving lives during accidents.

We all know how helpful airbags are in times of accidents as they tend to prevent you from hitting any hard surfaces of the car. However, they only work correctly as long as you are wearing your seatbelt. The airbags would still open, but since you are not wearing the seatbelt, you are likely to be forcefully moved from your place without hitting the airbags.

Seatbelts were invented in the early 1960s but were not popular until the 80s and 90s. Today, every car has got at least four seatbelts installed in them, and every country in this world has made it necessary for drivers and passengers to wear a seatbelt.

Failure to abide by this law can result in hefty fines, ban of your vehicle, and you could also be forced to spend some time in jail. Is wasting time in courts and being charged by the law worth not putting on the seatbelt?

You must have gotten insurance for your vehicle when you bought it in case there is an accident in the future, and you need money to pay for the damages. Did you read the contract carefully? In most cases, there is a clause in the contract which says that the owner will only claim the insurance money for the damages to the car if he/she was wearing the seatbelt while driving. Not wearing a seatbelt means that if you are left alive, then a part of your month’s income would be spent on the repairs of your car.

According to reports, there have been many incidents in which the car was ultimately totaled and could not be repaired. Upon taking a look at the car, one would say that the driver and the passengers could not have survived the crash.

However, that is not the case in reality, as wearing a seatbelt saved everyone’s lives. Not only did they walk out of the crash alive, but they did not even get any bruises or scars to show. This is a small example of what seatbelts can do for you, so be wise and make sure to put it on before leaving for work next time.

A car accident can happen with anyone and anywhere, especially when you were not even expecting it. If you suddenly come in the middle of a freeway, then you can get hit by a truck or car.

Similarly, there are other causes of a rollover car crash in which the car starts rolling over and over after being hit from the side with force. If the passengers are not wearing their seatbelts, then one can only imagine what will happen to them in such a car crash.

These car crashes can easily be fatal, but if a person is wearing the seatbelt, then it would keep their body intact and prevent it from hitting anything.

By now, you must have realized the significance of wearing the seatbelt and the role it plays in saving the lives of whoever is involved in a car crash. It is believed that wearing a seatbelt makes you feel comfortable while driving as you are entirely safe from all kinds of dangerous consequences of an accident.

WHAT TO DO IF THE SEATBELT IS STUCK?

Seatbelts can get stuck, especially if your car is old or you have been using it for a long time. Specific measures need to be taken in time to make sure that your car’s seatbelts are working correctly. The first thing you can do is take the car to an auto shop and get it fixed. However, do not drive wildly while going to the auto shop as you are not wearing your seatbelt.

There are other ways to get your seatbelt unstuck if you do not want to make the trip to a mechanic. You should see whether the auto-lock function of the seatbelt is off as it can easily get turned on if you pull the belt too tightly while wearing. Unfasten the seatbelt by pressing the button and let it smoothly go back to the retractor.

In case of an untangled seatbelt, pull it all out and then let it slide back slowly. Cleaning the seatbelt is also recommended when you are cleaning your car. Why? Using it over the years can make the fabric hard, so it does not come out and go back to the retractor smoothly. Cleaning it would not let it change its texture, and you can use it without any struggle.

A seatbelt can also get stuck in the time of accidents, especially if there has been a rollover car crash. It does not open, leaving you stuck in the car, which is very unsafe as the car can explode anytime. To get out of such a situation, it is advisable to keep a pair of cutters in the glove compartment of your ride so you can easily cut the belt and get out of the car.

Apart from getting life-long injuries to different delicate parts of the body, a considerable part of your medical insurance can be spent on your recovery from a car accident. Not wearing a seatbelt means putting yourself in risk as accidents are mostly fatal.

You could be traumatized by driving for the rest of your life, even if you get to live through an accident. We already fear so many things in our lives, so fearing driving will only add to the list. Your license could be taken away by the state, meaning you can no longer drive any vehicle.

It may not be a habit for you to wear a seatbelt before starting your car to leave for work or college in the morning. However, it is never too late to begin, and once you start putting on the seatbelt, it would become a part of your life.

A time would come where you would no longer feel relaxed while driving until you put on the seat belt. To put it simply, wearing seat belts can save your life and the life of your loved ones. It has done wonders for people involved in major car accidents as they were able to live through.